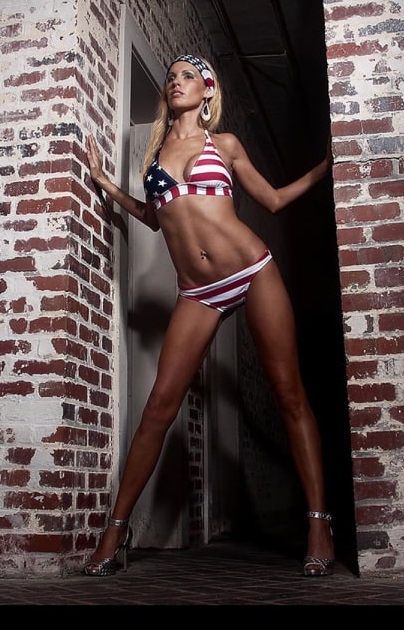 We have noticed something here at Palmetto Wire …

Both times we have written about South Carolina lobbyist Heather Johnson (here and here), our traffic counters have pretty much exploded.

That’s why we were thrilled when one of our intrepid readers submitted a positively scorching, scintillating and statuesque image of Johnson (above) posing in a red, white and blue bikini at Atalaya, the historic winter home of Archer and Anna Huntington (and the centerpiece of Huntington Beach State Park in Georgetown County, S.C.).

Oh say can you see, people!

Yeah. If that doesn’t move the numbers, we don’t know what will …

As we have noted in our previous posts, Johnson works at the S.C. State House on behalf of medical marijuana, industrial hemp and related issues. Hailing from Horry County, this is her first year in the lobby.

“We have a feeling Johnson will be a mainstay on our pages,” we wrote last week.

Understatement of the year, huh?

Here’s a question, though: What does Johnson think of all the attention this outlet is paying her?

We don’t know, but we may find out sooner rather than later as our source has promised a treasure trove of pictures from her modeling days … images which are sure to generate, as our founding editor Will Folks is fond of saying, “clicks for miles.”

Surely we will hear from this siren at some point?