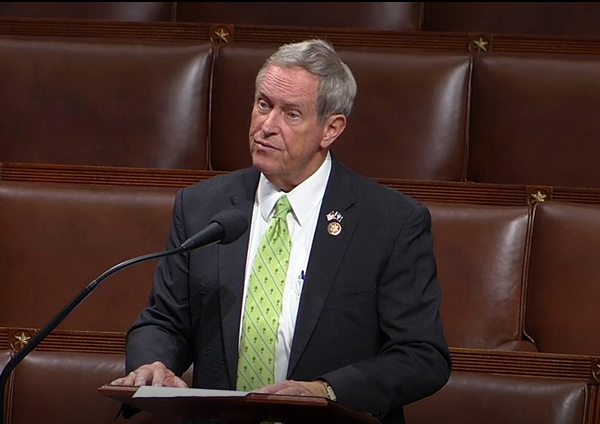 “H.R. 553, the Military Surviving Spouses Equity Act, is a bipartisan bill with over 365 cosponsors. In fact, it is rare that a bill garners this many cosponsors and was amongst the first to reach the new threshold for mandatory consideration under the Consensus Calendar. I am grateful that colleagues on both sides of the aisle support this legislation to repeal the “widow’s tax.”

“Thank you to all of the surviving spouses and advocates who have worked diligently and tirelessly on this legislation. The bill would have been eligible for a vote this Friday.

“Instead, Democratic leadership has decided to specifically bar this bill from independent consideration and include it in the flawed, partisan NDAA. In fact, the rule for the NDAA specifically states:

“Rule XV of the Consensus Calendar shall not apply with respect to H.R. 553.

“Democratic leadership has essentially said, if the NDAA does not pass, the widow’s tax doesn’t pass.

“Further, leadership has put this bill at risk of the conference with the Senate. Democratic leadership knows that it is not included in the Senate’s version of the NDAA, and I am disappointed with the other side.

“I even offered a bipartisan amendment with Chairman John Yarmuth to have this legislation be included in the NDAA, but they did not make that amendment in order. Instead, Democrats placed their own amendment in a partisan rule and are forcing the stand-alone bill to be barred from the Consensus Calendar.

“This is partisan politics at its worst. This is heartbreaking for the 65,000 military widows who have worked tirelessly and very effectively to mobilize support behind the bill.

“At the peak of their hopes that this bill would pass the United States House of Representatives this week, leadership now has put the bill in jeopardy. Instead of supporting our military and the military families, including those who have died and sacrificed for this country, the majority has chosen to violate their own rules and put the bill in jeopardy. This tactic cheapens the efforts of these military widows by turning their real-world plight into a partisan tactic.

“A stand-alone bill in the Senate with over 365 House cosponsors would have had a better chance of passing and sent a clear and overwhelming message of support to these widows. Instead, we will be sending this over in a partisan bill, almost ensuring its demise in the Senate. This is a disservice to the widows who deserve better.

“I am grateful for Ranking Member Tom Cole, who argued against making H.R. 553 as part of this self-executing rule. He is right that this shortcuts the process and is politics at its worse.

“Our team followed the rules the Democrats set forth to have this overwhelmingly bipartisan piece of legislation set for a vote, and they decided to play partisan politics and remove it. Further, the Rules Committee failed to notify my staff and even failed to notify the community that would be most directly impacted by their actions: the widows who have worked tirelessly to generate support for H.R. 553.

“The community, inspired by veterans service organizations, gave all, and this Congress can’t even follow its own rules. It is sad how the majority has undermined this important bill in the manner they have done.

“Barring this bill from independent consideration is outright wrong, and I ask that each of my Democratic and Republican colleagues think long and hard about the implications of this parliamentary gimmick.”