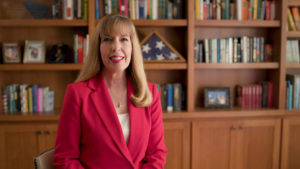 Landing stressed her experience as a financial professional as an extremely important need in Congress today.

“There is not a single investment advisor nor financial planner in Congress; and we wonder why we don’t have a balanced budget, or a budget at all for that matter, and why Congress’ habit of spending vastly more than they bring in has caused our debt to spiral out of control. Well, I am a financial planner, and I will work hard to make Congress fiscally responsible with balanced budgets, lower taxes, and less debt.”

Landing introduced her platform by highlighting the failures of our current Congress.

“We are all tired of Congress being entirely focused on investigating our successful President, while failing to act on their primary duties and what we need most – a responsible and balanced budget, improved infrastructure, a fix to the broken healthcare system, and most importantly, a commitment to keep American families safe.”

She also drew start contrast between herself and the current Congressman, even invoking famous words of former President Ronald Reagan.

“Rather than attention-seeking stunts, we need a more thoughtful, and dare I say, mature approach in Congress. But, as President Ronald Reagan famously said, ‘I will not make age an issue of this campaign. I am not going to exploit, for political purposes, my opponents’ youth and inexperience.’”

Following the announcement this morning, Landing heads to Beaufort for a Meet and Greet this afternoon.