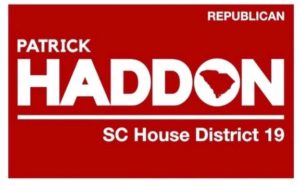 Haddon has spent his adult life as an active member of the community. Beginning in 2004, he was elected as commissioner of the Parker Fire and Sewer Department where he served for 11 years. For more than 15 years, Haddon has maintained an active role in the Greenville County Republican Party, including his time as Chairman from 2009-2011, and as a member of the SC GOP Platform Committee.

Haddon, along his wife Shelly, have successfully owned and operated multiple businesses, employing dozens of workers throughout the state. “My background as a successful businessman, and my experience in leading the conservative movement in Greenville, makes me uniquely qualified to make our state government more efficient and accountable,” said Haddon.

Haddon begins his campaign with a strong show of support. State Senator Dwight Loftis, who recently vacated the District 19 House seat, announced his support by saying, “Patrick Haddon’s strong commitment to his family reflects his deep commitment to traditional family values, which stand as the foundation for a stable community and society. I support Patrick for SC House 19.”

“Patrick Haddon is a staunch supporter of the Second amendment, an avid protector of the unborn, and a pro-business conservative,” said Rep. Adam Morgan. “For these reasons—and more—I am endorsing Patrick Haddon in his race for South Carolina House of Representatives.”

Cheryl Taylor, a president of the Upstate Republican Women’s Club and small business owner, described Haddon as a “businessman, family man, and friend who will work hard to represent the conservative values we hold in District 19.”

Patrick Haddon is a successful businessman from Greenville, SC. From 2009-2011, Patrick served as Chairman of the Greenville County Republican Party and has been active in the party for more than 15 years. He is a member of Berea First Baptist Church where he teaches Sunday school. Patrick and his wife Shelly have three children.