WASHINGTON, D.C. – U.S. Congressman Joe Wilson (SC-02) hosted a ceremony to present the Bronze Star Medal to Mr. Bernie Grossman of Lexington for his brave service to our country. 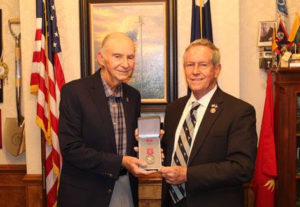 “Bernie Grossman is a hero and patriot who bravely faced our deadly enemies and did not leave his platoon behind. I had the incredible honor of presenting Mr. Grossman the Bronze Star Medal, an award that was long-overdue, for his heroic achievements in Vietnam. We are grateful for his selfless service and personal courage that holds with the highest traditions of military service. His valiant actions clearly display his bravery, as well as the heroism of his unit and the U.S. Army,” said Congressman Wilson. “Our women and men in uniform continue to sacrifice for our freedom, and it is our duty to honor and show respect to our heroes at every opportunity possible.”

On April 21, 1966, Mr. Grossman was a Specialist in Vietnam when his platoon suffered heavy casualties from enemy fire. Specialist Grossman quickly led the survivors, assisted the wounded, relayed the instructions of his platoon leader, and brought effective fire on the enemy positions. It was only after the enemy was defeated that he informed his platoon leader of his own wounds.