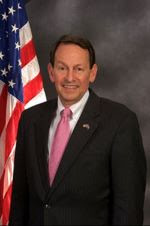 Dr. Mick Zais, former president of Newberry College, South Carolina’s 17th State Superintendent of Education, and the current Deputy Secretary of Education in the administration of President Donald J. Trump, will be the guest speaker at the First Tuesday Republican Club of the Midlands’ March luncheon, TOMORROW, in downtown Columbia. All media are invited to attend:

WHAT:
First Tuesday Republican Club of the Midlands

WHERE:
Hall at Senate’s End
316 Senate Street
Columbia, SC 29201
(middle building on site, free parking out front and on the street)

Dr. Zais’ Bio:
Mitchell “Mick” Zais serves as deputy secretary of the U.S. Department of Education. He was confirmed by the U.S. Senate on May 16, 2018, after being nominated by President Donald J. Trump on Oct. 5, 2017.

Mick brings to the Department a deep background of experience in education and service to the United States. Prior to joining the Department, Mick was elected South Carolina’s 17th state superintendent of education. In this role, he demonstrated a commitment to serving students and to pursuing excellence in education by overseeing the operation of and advocating policy for 82 school districts, 1,250 schools, 51,000 teachers, 720,000 students, and a $4 billion annual budget. While he was in office from 2011 to 2015, on-time high school graduation rates increased from 72 percent to an all-time high of 80 percent. He also developed and instituted an accountability system whereby every school and district in the state received a letter grade of A through F, based on measures of student growth and student learning outcomes.

Prior to his election as South Carolina’s state superintendent of education, Mick served as president of Newberry College for 10 years, from 2000 to 2010. During his tenure, enrollment nearly doubled and, during the last three years of his administration, U.S. News and World Report named Newberry College one of America’s best colleges.

Growing up in a military family, Mick attended 10 public schools in 12 years. He then went on to graduate from the U.S. Military Academy at West Point and to serve 31 years on active duty in the United States Army, retiring as a brigadier general.

Mick earned a Bachelor of Science in engineering from West Point, a Master of Science and a doctorate in social psychology and organizational behavior from the University of Washington, and a Master of Arts in military history from the School for Advanced Military Studies at Fort Leavenworth, Kansas. He did post-doctoral studies in national security affairs at the National Defense University in Washington, D.C.

During his military career, Mick served as deputy commanding general at Fort Riley, Kansas, and as an assistant professor at West Point. He also served as a White House aide and as the Pentagon’s chief of war plans. Overseas assignments included Vietnam, Korea, Panama, and the Middle East.