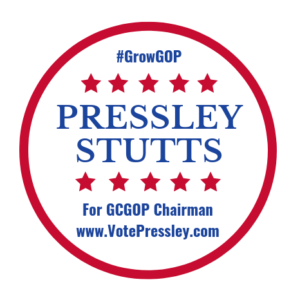 Pressley Stutts, chairman of the Greenville TEA Party and member of the SC State Board of Directors of the Republican Liberty Caucus (RLC) has announced that he is running for the chairmanship of the Greenville County GOP (GCGOP). The following is a statement from Mr. Stutts:

“Ever since millions of Americans elected President Trump on his “Make America Great Again” (MAGA) platform, there has been a need for true conservative leaders on every level to get involved and help the President make a difference and continue his agenda. We have ceded the field way too long and it’s time we get back into the game.

Eighteen months ago when I was elected to lead the Greenville TEA Party, attendance had dwindled to about 25. We were struggling to engage our fellow Republicans. Because of our positive message of possibility and opportunity for all and with the help of many others, we have built our numbers up significantly and have had over 300 in attendance at our meetings and the debates we sponsored.  We are making a difference.

The leadership skills I learned from 30 years as a US Naval Officer (22 of those 30 years attached to the Marine Corps} have taught me to be proactive, to work with and respect the opinion of others, to remain steadfast in doing what is right and to surround myself with a team of competent people who are a lot smarter than me. These skills are easily translated to the Republican Party. 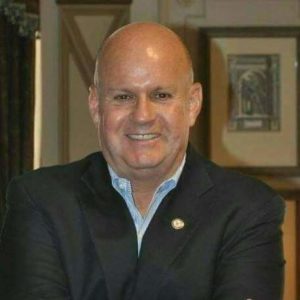 Ten years ago in 2009 when I attended my first Greenville County GOP Convention, there were approximately 1000+ people in attendance. Eight short years later in 2017, the number had dwindled to roughly 200 hundred in attendance. That’s a precipitous drop of approximately 80%! For various reasons, people have been ostracized, bullied and driven away from party involvement. This need to stop NOW! If we as Republicans are to remain relevant, we need to become a party of open doors and closed primaries, rather than closed doors and open primaries. After all, we are the BIG tent party, are we not?

As Republicans, it’s not enough to sit back and complain. We CAN and MUST do better.  We need to get into the arena and provide proactive leadership rather than manage the orderly decline of a party whose status quo establishment line has failed us miserably time and time again. I encourage everyone, whether they have participated in the Republican Party in the past or not, to once again BOLDLY engage with us on the local level to help us restore the Grand Old Party to greatness. This is a movement which is greater than me or any one of us. Stay tuned as our team will soon be providing more information as to how you can partner with us so that your voice may be heard, too.”