PALMETTO PROMISE: Winners and Losers in the SCANA-Dominion Deal 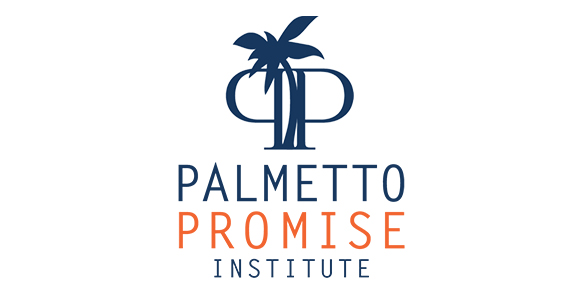 Palmetto Promise has spoken out strongly on what should happen to Santee Cooper, the state-owned partner in the V.C. Summer nuclear debacle. We correctly predicted future rates and provided a hard figure on what Santee Cooper customers will be paying per day over the 38 years it will take to pay off the nearly $15 billion in principal and interest owed.

To date, we have not weighed in on the unique complexities of the SCANA/Dominion issue, as armies of lawyers and utility experts sort through the complicated mess of what essentially is a merger of two private companies, albeit in an admittedly heavily regulated and dysfunctional
monopoly energy environment.

But after wading through muddled and sometimes contradictory coverage of SCANA rates/ merger/ lawsuit issues, we feel compelled to present a clear-eyed comparison to SCE&G customers and state policymakers of who wins and loses under the various proposals. 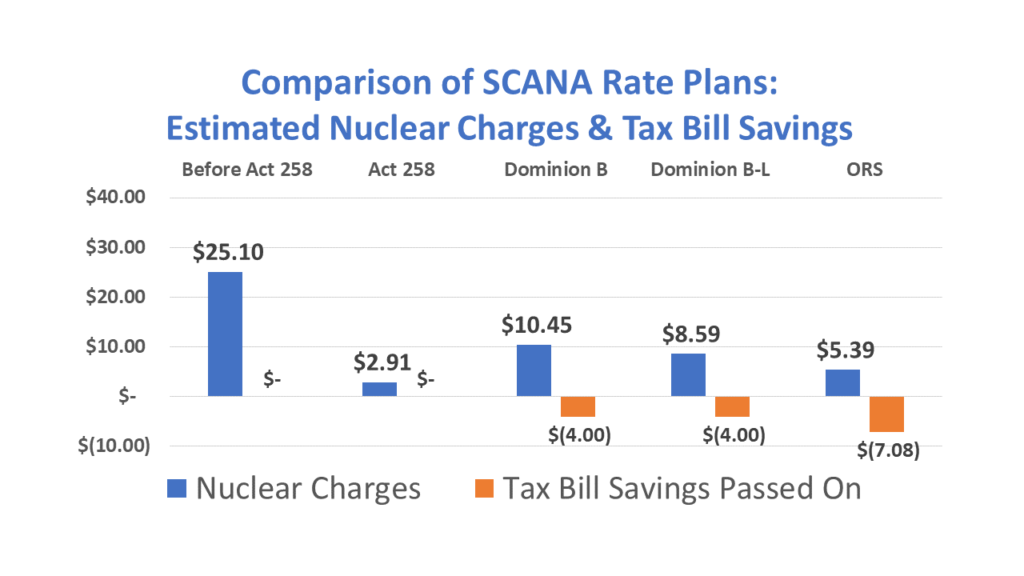 1. Who wins on electricity rates?

What will they decide?

The adjacent chart is a simplified overview of the options currently on the table. “Before Act 258,” shown for reference, is the monthly amount a typical SCE&G customer was paying for nuclear expenses in May, 2018. That is before the legislature passed “Act 258” to create a temporary rate removing most of the rate increases incurred due to V.C. Summer costs (a reduction of about 15% of the 18% seen on most utility bills).

“ORS” is the plan recently advanced by the state agency known as the Office of Regulatory Staff, a watchdog entity created by the legislature to separate the PSC judicial-type functions from public interest functions. In their rate proposal, ORS argues that some of the nuclear charges were “prudently incurred” (before early 2015) and adds a robust figure for SCANA’s windfall due to the Trump tax cuts that they believe should be paid (future) or repaid (past) to customers. All told, under the ORS proposal, rate reductions plus tax benefits would mean an approximately 20% rate reduction.

No one is suggesting we go back to May, 2018 and let SCANA “keep it all,” not even SCANA. But there is strong support with the public for forcing SCANA to return every nickel, a position previously endorsed by some political leaders that would go even beyond the level of relief ORS is advocating.

Then there are the Dominion offers – “Dominion B” and “Dominion B-L” – the current key being Dominion B-L. This is the offer that is tied directly back to our other Who Wins factor: the lawsuit. If the PSC chooses a rate at or near Dominion B-L, Dominion Energy of Virginia has said it will buy SCANA Corporation, the class-action lawsuit brought by SCE&G ratepayers will be settled, and presumably the lawsuit over the constitutionality of the action of the legislature that made the V.C. Summer boondoggle possible (the Base Load Review Act) will go away.

Key lawmakers have sincerely intervened and endorsed Dominion B-L, fearful that a too-aggressive move by the PSC (like adopting the ORS proposal) will blow the Dominion deal and SCANA will have to file for bankruptcy.

Winners and Losers on Rates. The ORS proposal seems closest to what should be the target: providing maximum relief to ratepayers while upholding the rule of law. Dominion B-L is a good faith offer, but it is a clear win for Dominion and SCANA stockholders (including SCANA executives with stock), and a missed opportunity to protect ratepayers as fully as they should be. The question the PSC must resolve: who will bear the primary burden for all the money poured down the V.C. Summer hole due to SCANA’s failed leadership: stockholders and a potential buyer … or customers? Will customers fully benefit from SCANA’s Trump tax cut windfall and other calculations in the ORS proposal?

2. Who wins in the lawsuit?

Then there is the $115 million that will be returned to customers from former executive bonus funds plus undetermined proceeds from property sales (Ramsey Grove Plantation, the Charleston Gas & Light Building in downtown Charleston, and certain SCANA properties in Cayce). Those funds combined won’t go very far across a customer base of 711,452.  And unless they are convicted of wrong-doing, SCANA executives will still be contractually entitled to receive their “Rabbi Fund” bonuses. They will just have to be paid out of a different pot of money.

Which of course raises the question of attorney fees. What figure will those fees be calculated on: the $2 billion in rate relief + the $115 million in executive deferred compensation + an undetermined amount for property sales? Only the $115 million + property sales? Will those lawyer fees be paid out of those two meager fund pools meant to be returned to ratepayers?

Winners and Losers in the lawsuit. The clear winners in the lawsuit are the lawyers. The $2 billion rate relief would likely have happened anyway. So for essentially securing what already was, it appears the lawyers will get an estimated 20% of ratepayers meager $115 million+ to divvy up.

A parting word. The rates issue and the lawsuit issue come down to nervousness about the future viability of SCANA. We don’t accept the common wisdom that SCANA will go under if Dominion doesn’t get Dominion B-L, or even that bankruptcy would necessarily be a doomsday scenario. Dominion’s persistence in sticking with this deal amply demonstrates that they want the guaranteed rate of return they will secure by owning SCE&G…and perhaps goodwill for other projects. But extensive studies suggest SCANA can survive without Dominion, even when paired with robust rate relief for customers.

When understood in those terms, half-baked rate relief and lawyer victory laps seem shortsighted and give little reason for customer rejoicing.