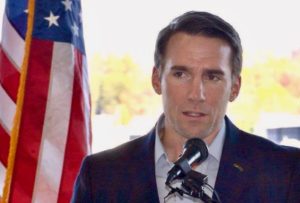 Cox will use Leadership Position to Advance Reform Agenda

As chairman of the Freshman Caucus, Bobby Cox will focus on forging unity within the group and working to strengthen ethics reform, improve public education, address infrastructure, propose term limits and standing strong on conservative principles. Bobby will also serve on the Republican Majority Whip team to help further the conservative agenda in our State government.

Rep. Cox said, “It is an honor to be elected as chairman of the Freshman Caucus and I am looking forward to working with all the other freshman legislators to provide a new perspective, a fresh view on the same old problems. I can attest that there is boundless energy in this group to tackle South Carolina’s challenges. We want to find the common-sense solutions that will make our state simply the best place to live, work and raise a family.”

It was also announced last week that Representative Cox will serve on the South Carolina House Education and Public Works Committee, where he will be charged with dealing with legislation specific to education, highways, railroads, and aviation throughout the state.

“State public education needs our undivided attention. I look forward to working tirelessly to improve our schools and advance a positive education reform agenda, that supports teachers and students first. Being on the Education and Public Works Committee will not only allow me to tackle our education concerns but also our state’s failing infrastructure needs.” Cox said.

Bobby Cox ran and won the Republican primary as a conservative reformer against a long-term Republican incumbent. Cox received 63% of the primary vote and built widespread grassroots support throughout his district. He was unopposed in the November General election and will represent State House District 21 which comprises the eastern part of Greenville County.

Bobby is a Businessman, Army Ranger, and Citadel Graduate. During his service in the Army, Bobby conducted four combat deployments in the wake of the 9/11 terrorist attacks. Bobby continues to serve in the Army Reserves as a Lieutenant Colonel. Bobby presently works at SIG SAUER as their Director of Government Strategy where he oversees business development programs for the Pentagon, State Department, and Federal Law Enforcement Agencies.

Bobby is married to his wife Joscelyn, a Furman Graduate, and they have two children, Reagan age 9 and Seth age 6. They are active members of Taylors First Baptist Church.