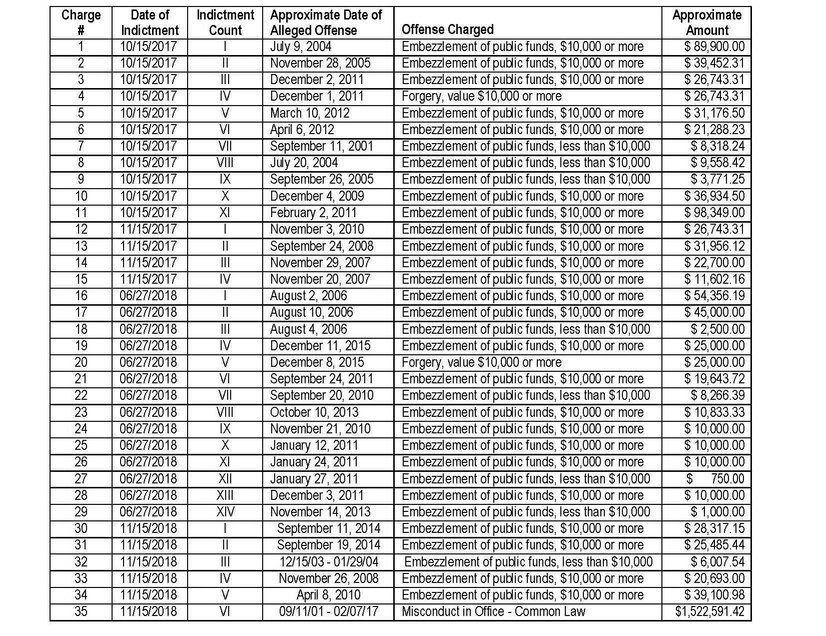 Embezzlement charges #30 and #31 allege that Thomas directed the Financial Advisor for the BCSD’s investment account to make payments to “Bank of America” supposedly for legitimate “lease” expenses. These disbursements instead were converted to personal use for payment to THOMAS’s personal line of credit at Bank of America.

Embezzlement charges #33 and #34 allege that THOMAS converted public school funds to his personal use, by causing BCSD to disperse funds which supposedly were to pay legitimate BCSD expenses. These disbursements instead were converted to personal use for payment to THOMAS’s personal credit card account.

Charge #35 is for misconduct in office and alleges that THOMAS committed acts and omissions in breach of his duties as a Financial Officer and his duties as a public official of good faith, honesty, and accountability – thus receiving $1,522,591.42 in compensation paid to him during the time period while he willfully and dishonestly failed to properly and faithfully discharge his duty to manage the finances of Berkeley County School District.

The total amount alleged to have been embezzled in this new indictment is approximately $119,604.11.

Embezzlement charges #1 and #2 allege that THOMAS, caused public school funds to be wired from a BCSD account directly into a personal bank account belonging to THOMAS and another individual, whereby the funds were then converted to personal use.

Embezzlement charges #16, #17, and #18 allege that Thomas directed a trustee for the BCSD’s bond issuer [SAFE] to make payments to “Wachovia Bank” supposedly to reimburse BCSD for legitimate “Cost of Issuance” expenses. These disbursements instead were converted to personal use for payment to a personal line of credit at Wachovia Bank that Thomas shared with another individual.

Embezzlement charge #11 alleges that THOMAS converted public school funds to his personal use, by personally visiting a local bank branch and executing a counter withdrawal on a BCSD account supposedly to pay an “Additional Architect Fee” for Cane Bay Middle School. Instead he used that $98,349 to pay down his own personal credit card.

Embezzlement charge #14 alleges that THOMAS converted BCSD funds to his personal use, by deliberately causing BCSD to overpay a vendor and then directing the vendor to refund that overpayment to his home address whereby he converted those funds to personal use. The amount alleged to have been embezzled in the prior indictments is approximately $665,842.98.

Attorney General Wilson stressed that all defendants are presumed innocent unless and until they are proven guilty in a court of law.

You can see the indictment here.